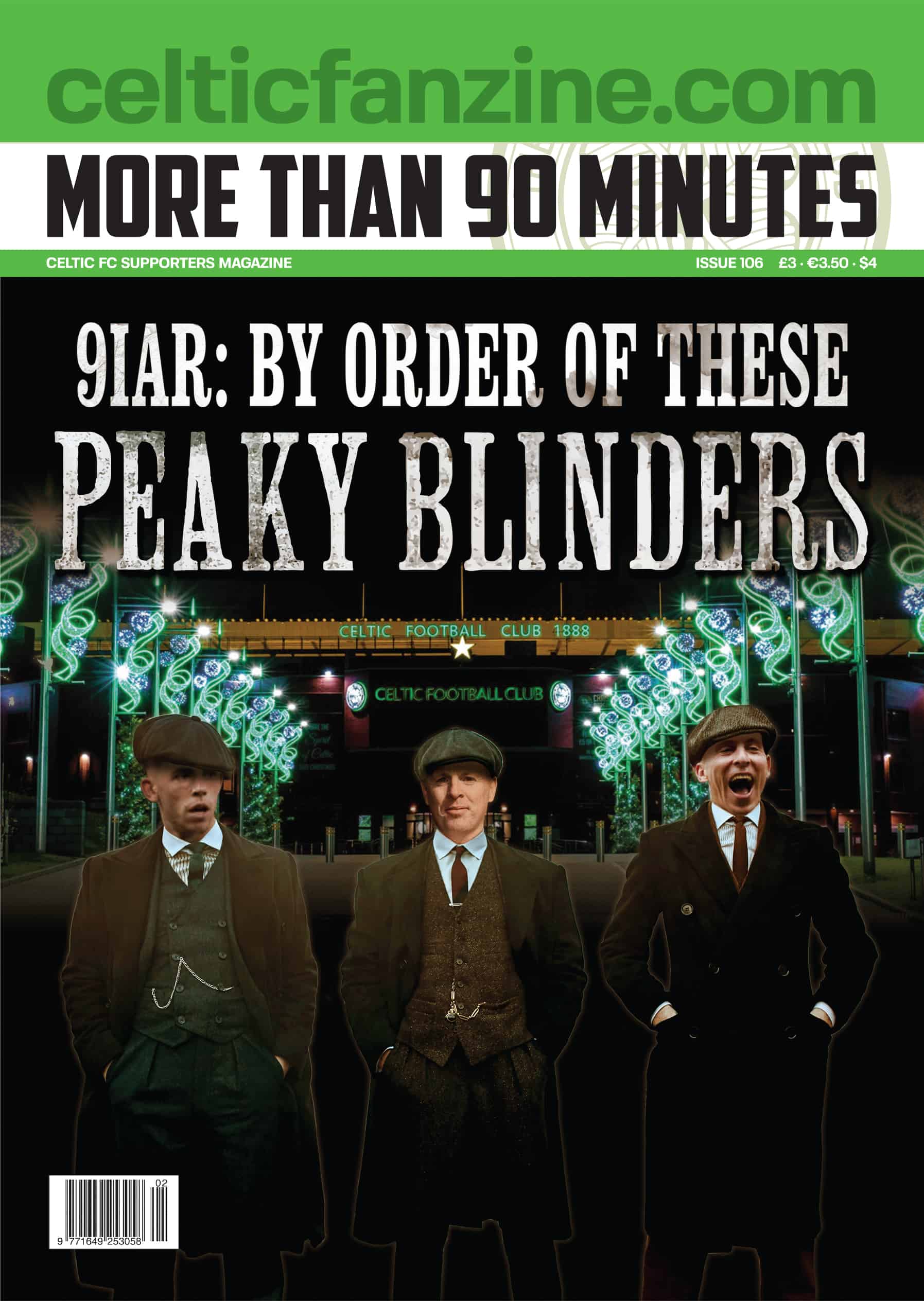 Just over 18 years ago Celtic Fanzine, More than 90 Minutes first went on sale outside Celtic Park and we are back again this month with issue 106. The fanzine will be on sale from early next week and boasts 48 packed pages on Celtic FC & Celtic Fan related articles and interviews.

Issue 5 saw us revert back to A5 format at the request of our readers, which allowed us to reduce the cover price and this has proved popular and issue 105 is now sold out at HQ but it may still be available in some newsagents. The digital edition is also proving popular especially with Celtic fans based around the globe. The digital edition also gives readers access to back issues.

Inside the new issue our very own Celtic Legend, John Fallon is back with his column, the Editor has been on his Europa travels and seems to be enjoying it and shares it with us in his Editorial.

Celtic’s historian and published author, David Potter looks back 50 years to Celtic’s two encounters with Benfica when a flip of a coin would decide who would progress in the European Cup, unsung Hero John McMenemy and Sir Bob Kelly get the Potter pen treatment and he also reviews the new Tom Campbell book – A Very Different Paradise.

Paddy McMenamin looks back at autumn in Paradise and those victories over Lazio and delves back into the history of Italian fascists and their allies. Like so many Celtic fans, Eoin Coyne may be eating his words with his praise for Neil Lennon.

John Molloy is back penning for us again and he’s still not happy with Kieran Tierney’s departure for Arsenal and the bright lights of London and the financial gain. Martin Donaldson looks back at Dr Venglos and Lubo Moravcik’s arrival and the latters impact at Celtic and also squeezes in a piece about Neil Lennon’s unfinished business.

Ciaran Kenny asks the question have we turned Hampden into Paradise? New Mammy Rachel Lynch thinks the Celtic Buzz is back after swapping party nights with the Ghirls for Sleepless night with baby Aoibheann. Congratulations to Rachel and her hubby on the birth of their first little Celtic fan from all the crew.

The Kano Foundation celebrate 10,000 kids free into football and share their story in this edition of the fanzine. Tim Molloy is on hand to tell us about Dermot Desmond buying into Shamrock Rovers in our native language.