More than 90 Minutes 20th Anniversary Edition back in stock 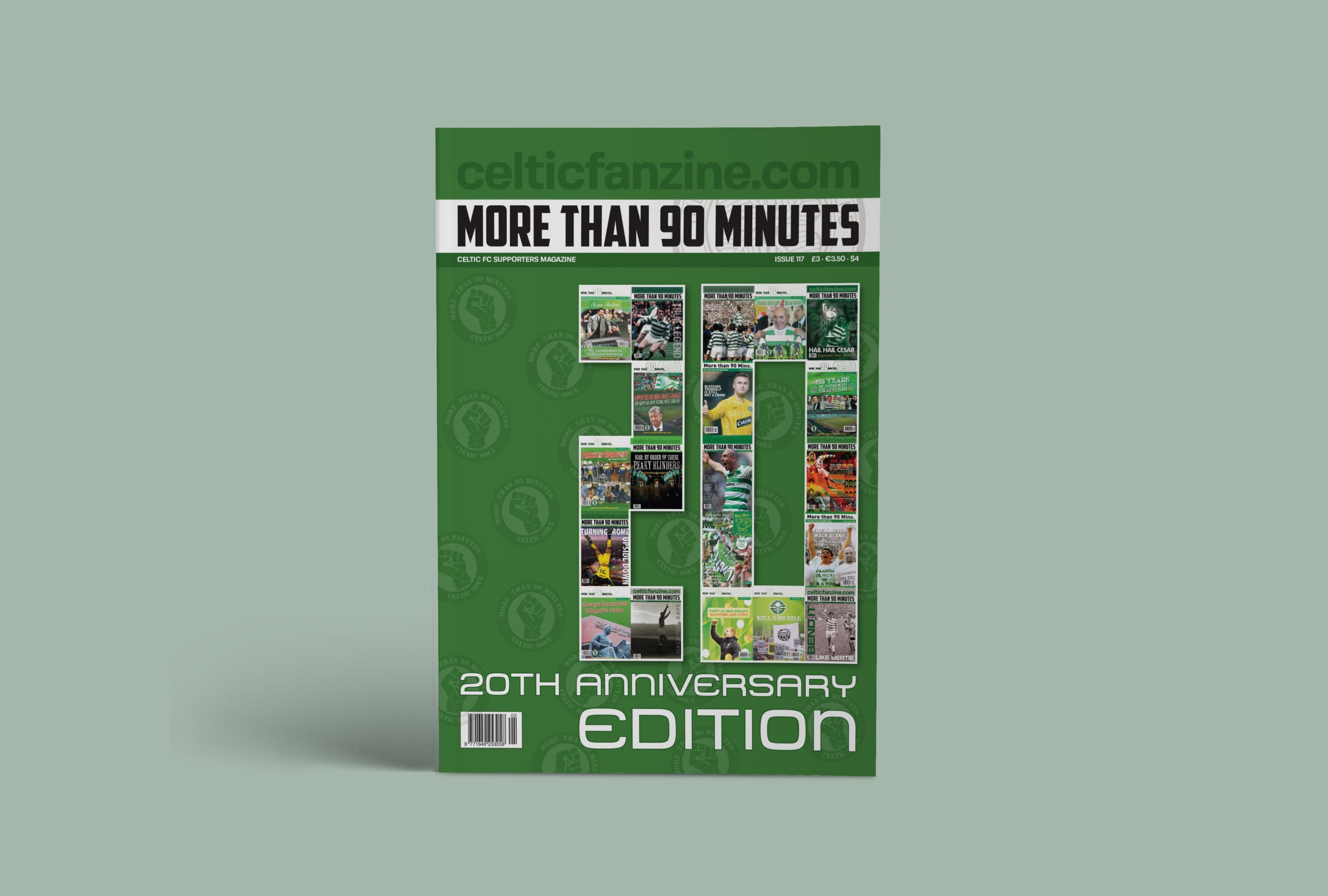 We have a small number of our 20th Anniversary edition back in stock to order a copy click link below. Thanks for the continued support.

Its hard to believe that it has been 20 years since More than 90 Minutes first went on sale at Celtic Park in September 2001. I can still remember that sunny day outside Celtic Park. Celtic under the guidance of Martin O’Neill Celtic beat Dunfermline comfortable that day and we went out to celebrate the win after selling a few hundred copies of issue 1 for £1. Myself, Sandra, Sinead and Tom were the ground sellers that day. Since then many people have sold the fanzine outside Paradise and also at many away grounds in all weathers.

Fanzines were once the main stream of media for football fans who were fed up with the main stream media slant and the official club publications and wanted an alternative slant on their team. Print media is not what it was but people of a certain vintage still want a hard copy of fanzines or a book and we felt a backlash a few years back when we suggested we go digital only. We soon found out that the demand for our print copy could substance the increased cost of printing and post.

When Covid 19 and the realism we would have no match day sales we faced a decision to put out the fanzine or put it on hold till we got back, that decision was made easy because of the support we received from subscribers and sponsors who backed us including some Celtic Minded businesses which were closed.

Since those early days we have met some great people and made some lifelong friends from Harald Harsson from CSC Norway who wrote the first letter into the fanzine to Javi and the Betis fans who helped me recover my phone in Seville recently.

Interview wise the first one we did was with my good pal and St. Margaret’s CSC stalwart Hilly followed by Lisbon Lion Legend the late great Tommy Gemmell. The most recent interview features Trevor Sinclair in conversation with Mick Kane.

Mick started writing for us recently and has been busy doing our watch previews for celticfanzine.com and chasing down some guests for a chat. We have been blessed to have had so many contributors from all walks of life sending in articles, cartoons and interviews over the 20 years.

When I think back I remember a young comedian called Kevin Bridges appearing in the fanfile, an emotional interview with Charlie Gallagher. Signing up John Fallon as a guest columnist over a brandy shandy in a marquee in Las Vegas while watching Riverdance. There are too many people to thank or mention so I won’t in case I forget someone but you know who you are and you know what you have done to help get the fanzine out on a regular basis.

I suppose if I flicked through the last 116 editions I would remember so much more and reflect back some more over the last twenty years. I keep them all in files at More than 90 Minutes HQ,. Hopefully we can keep going in a World where media is changing by the second in a digital age of social media where quality journalism is being replaced by click and paste lazy journalism, rumours, bullshit and sensationalised headlines.

Thank You so much for the continued support.