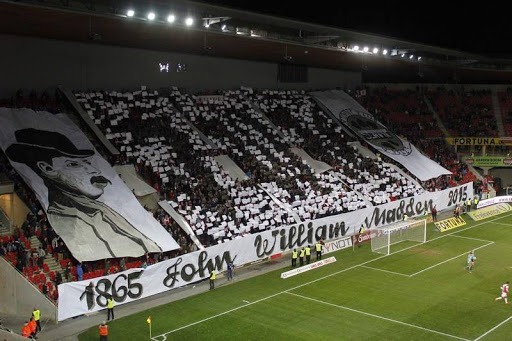 In the middle of WWII, the Scottish newspapers told of Palmerston Park being used to host football matches between troops from allied countries. The armies of Belgium and Norway faced off in January 1941, whilst the Czechs were set to play against the Norwegians on 8 March. Queen of the South put out an appeal for Celtic fans to attend the exhibition match by printing the following letter in the Daily Record on 19 February 1941: “Now they come among us. Down Dumfries way there is a big Celtic support. When they see the Czechs play, they can tell themselves they are watching the results of the coaching of a very famous Celt of other days – Johnny Madden, who lived in Czechoslovakia and taught football there for over 30 years.”

Johnny Madden was born in Dumbarton in 1865. He began his football career with his hometown club, before signing for Gainsborough Trinity and then Grimsby Town. Returning to Scotland, working as a riveter in the Glasgow shipyards, Madden re-joined Dumbarton, where he caught the eye of Celtic’s founding fathers.

Madden was convinced to join the Celtic venture and played in the club’s first ever match; a 5-2 win over Rangers. He soon agreed to sign on a permanent basis and became known as “The Rooter” because his shot was said to be so powerful that it could uproot the goalposts.

The forward impressed beyond Scotland, attracting the attention of professional clubs in England again. He went to Sheffield on trial at the same time as Celtic were on a tour down south. However, Madden was spotted by Willie Maley and John Glass, who persuaded him to link up with the Celts for the rest of their tour and not to leave the club. For agreeing to the request, he found himself with a few extra shillings in his pocket.

John left Celtic in 1897 having played 118 league and cup games, scoring 49 goals. He won three league titles and a Scottish Cup, making him a very well-respected Celt. Therefore, Madden was handed a Benefit Match on 7 September 1897, in which Celtic lost 5-1 against Rangers.

After leaving Parkhead, he went to Dundee for brief spell. He then signed for Tottenham Hotspur, where he retired after a few matches in 1898.

As much as his career merits respect in Celtic circles, Johnny’s real story begins when he retired from the game. It was then that he emigrated to Prague to become Manager of Slavia Prague on 15 February 1905. His arrival in Eastern Europe would change the future of Czech football.

By taking his ideas from Britain, Madden was the first man to act as a manager at Slavia Prague and in the country itself. Prior to his arrival, there was only a system whereby team captains selected the teams. Tactics, formations, and training were unheard of. Madden brought new ideas and was said to be ahead of his time in terms of prohibiting players from smoking or drinking either side of matches. He also introduced fitness training and gymnastic exercises. Czech football was revolutionised and would never be the same again.

These methods and proper managership were introduced across the nation as everything Madden implemented turned into success. Indeed, his arrival heralded a golden era for Slavia over the next 25 years. He was regarded as “the Father of Czech football,” and won the Berlin Britz Manager of the Decade award (1910s).

Overall, Madden guided Slavia to three local cups and three Czechoslovakian League titles (the Czech League was only founded in 1925). He is estimated to have managed Slavia to victory in 134 out of 169 domestic matches, and 304 out of 429 matches when international cups and friendlies are taken into account.

Celtic linked up with Johnny Madden again, when the Hoops toured Czechoslovakia in 1922. A match was organised against Slavia Prague and it was the hosts who ran out 3-2 winners in an aggressive game.

In 1930, Slavia Prague, still under Madden’s guidance, reached the Coupe Des Nations Final. The competition was a precursor to the European Cup but did not include any clubs from the UK. Following defeat in the Final, Madden retired from football at the age of 66.

Despite calling time on his managerial career, John remained in Prague with his Czech wife, Francesca Chekhov, for the rest of his life.

The performance of the Czechoslovakian national side in the 1934 World Cup stood as testament to everything Madden had introduced to football in the Bohemia region. The team, which featured eight Slavia players, lost in the Final of the tournament against Italy. This inspired Madden to keep coaching at an amateur level, which he did from his wheelchair until the age of 73.

He passed away in April 1948 and, in tribute, Slavia players laid flowers at his grave after every trophy success for many years. Meanwhile, a group of the club’s supporters still visit his grave each year to pay their respects.

A stand at Slavia’s Eden Arena stadium is named after Madden. He remains a legend of the club and Czech football as a whole. It goes without saying that his story should be better known and regaled across Scotland.

*John Madden’s grave is one of the landmarks that appears in The Holy Grounds of Glasgow Celtic: A Guide To Celtic Landmarks & Sites of Interest. To read his full story, the book can be purchased at the following link. www.amazon.co.uk/HOLY-GROUNDS-GLASGOW-CELTIC-LANDMARKS/dp/B08QSG86YN/