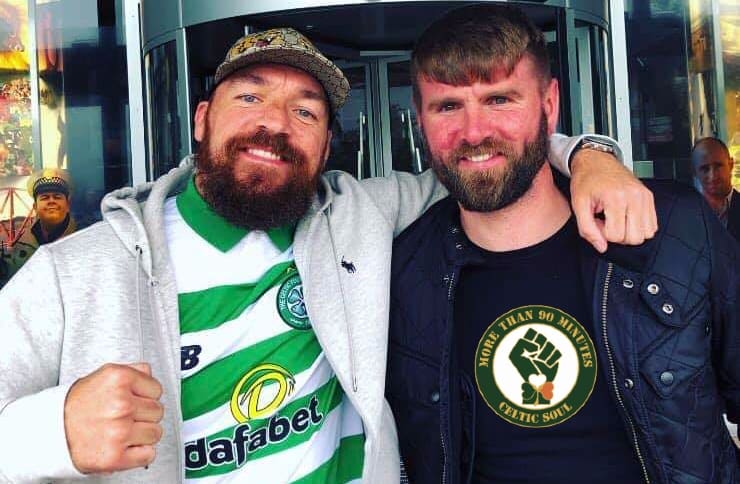 Mixed martial arts becomes more popular on these shores more each year. When the UFC come calling the show inevitably sells out.

At present Scotland has four UFC stars and only one signed to Bellator, widely regarded as amongst the top promotions.

It so happens the one in Bellator is a massive Celtic fan, Chris Bungard. He became the first Scot to sign with Bellator, beat a former two weight champion from British promotion BAMMA on his debut in Newcastle and stole the show.

His second fight didn’t go as planned when he lost a unanimous decision against Charlie Leary. The thing with MMA compared to boxing is that losing is part of the sport, fighters come again, it’s unusual to stay undefeated.

“Obviously Bellator are a massive organisation,” Bungard told me. “So to be part of that roster and fight on massive cards is where I feel I belong. Testing myself against the best and improving and growing as a martial artist and a person.”

Having got off to a great start to his Bellator career, Bungard was asked to do the half time draw af Celtic Park and also appeared on the BBC’s Off the Ball before the cup final which also featured Paddy McCourt.

“Aye the halftime draw was mad.” Said Bungard. “It was nerve racking being out there on the pitch but a mad buzz before the game having a cuppa with some of the Lisbon Lions. Unreal.

“Off the ball was a good laugh. Me, Paddy and Tam (Cowan) got a good laugh before the cup final then jumped in a taxi to Hampden to see the treble treble. History.”

Did they chat much MMA?

“Not much to be fair. Different topics, which I was fine with. It was nice to talk about something different for a change.” Explained Bungard.

With the BBC having asked a MMA fighter on to the show, it again highlights the fact the sport is on the rise, its hoped that BBC Scotland will show some coverage later this year of one or two of the local promotions. They have done a good job with some of the local boxing shows having been broadcast live recently.

“Obviously any coverage of MMA on any channel is great for the sport, but anyway BBC is involved is always a plus for the growth.” Bungard agreed.

Moving on to Celtic, I asked Chris if he remembered his first game.

“My first game was in 1997. 3-0 victory at home to Hearts. My uncle John took me. Larsson hat trick. So easy to remember haha.”

Like most fans of his age, the 30-year-old has a clear personal favourite when it comes to Celtic players.

“Easy. Henrik Larsson.” The man from Holytown proclaimed. “A world class player on and off the field. Who has scored all types of goals and assists plus moved to Barca and Man Utd and won things after seven years at us. Hero!”

Like most Celtic fans, Chris was born into being a Celtic fan.

“Celtic’s a way of life for most of us. Your born into it, back them no matter what. Up’s, down, highs, lows. All part of the love of your club. Faithful through and through.”

Everyone has their own special game, one that is memorable for whatever reason. Chris Bungard’s was a crucial win which would help Celtic go on to win the 2008 league title when it looked like Rangers had it in the bag.

“I’d probably say big Jans last minute winner against them.” Bungard said. “My good friend Danny Fagan gave me his ticket for my first ever Old Firm game and what a game it was. Naka swerve, a missed penalty then that goal. Ended up 10 rows in front. Haha!”

Bungard clearly loves football and still plays amateur football for Bullfrog AFC, any chance he could have played at a higher level?

“Nah man, obviously a dream to play for Celtic but amateur was my level. Think I was on a the bench for a junior team but that was it. I couldn’t be a professional footballer. I’d end up in the crowd celebrating or winding them up haha.”

Bungard is back in the cage tonight in Dublin against Brent Primus.