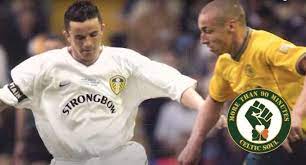 Few footballers can claim to have been cheered by both sets of rival fans – but that’s exactly what happened to Gary Kelly during his Leeds United v Celtic testimonial match.

The money from his testimonial game against Celtic would not only fund a cancer support centre in his hometown but money would be split with a cancer charity in Leeds.

His Legacy is the Cancer Centre named after him in Georges Street, Drogheda. Gary a working class kid from Marian Park, who from an early age had a ball at his feet.

As Leeds United captain the fans called him a leader now they call him a legend after 17 years at the club. Leeds is a team and city very close to his heart but the town of good old Drogheda has always been and always will be home.

An International star for Jack Charlton and Mick McCarthy at World Cups as the Drogheda people looked on with pride as he lined out in the Green of Ireland. The Top Shop and Ollie’s Bars were filled to capacity cheering him on in distance lands at all hours.

Gary lives the quite life in his hometown now and is not interested in the limelight and after numerous requests to interview him he finally agreed to share his journey with us.

The Gary Kelly’s story will inspire many and is worth telling it’s a story of family, friends and football.