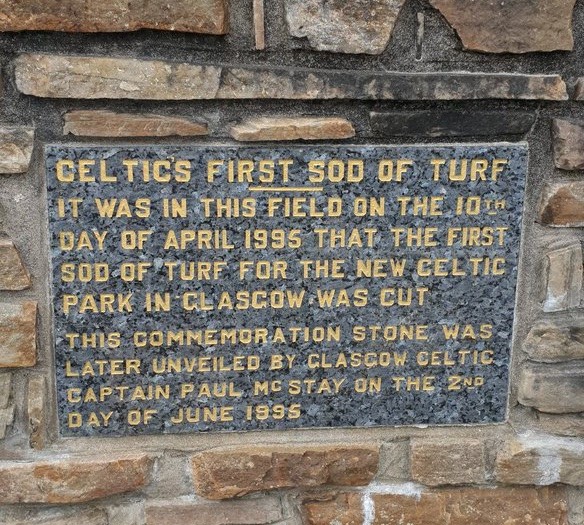 On the evening of 10 April 1995, in a small field located in the rural Donegal town of Mullaghduff, hundreds of people gathered to see a moment of Celtic history. The R259 Road, which is a scenic route around the coast of the Rosses, witnessed a sod of turf being dug from a field by members of the Rosses CSC. Local Fife and drum bands marched to the field and the local parish priest blessed the grass.

The sod then travelled with 50 supporters from Gweedore and the Rosses on a bus to Glasgow. To ensure that it was usable at Celtic Park, the grass was watered in Larne, before boarding the ferry. Once across the water, the turf carrying bus was met at Celtic Park by Fergus McCann, along with son of Donegal, Packie Bonner.

The Sod was laid in the centre circle of the revamped Celtic Park stadium pitch and a short service was held. A plaque was later unveiled at the field in Mullaghduff by Paul McStay. The purpose of the whole event was to relive the historical occasion when revolutionary Irish Patriot, Michael Davitt, was invited to lay the first sod of shamrock smothered Donegal turf at the new Celtic Park in 1892.

The ground was officially opened on Saturday 13 August 1892 with the club’s third, of what would prove to be annual, sports days. Newspaper reports of the time describe the weather that day to be of ‘the most disagreeable kind.’ Indeed, a thunderstorm hovered above the new ground at 3pm. However, the wet conditions were not enough to stop star attraction, Bradley (of Huddersfield), winning the 150 and 100 metre sprint races. Edinburgh distance runners, Hume and Hunter, claimed the top two spots in the mile race; whilst the day saw further distance runs and cycling jousts won by Englishmen.

A quote from the 1932/33 Celtic handbook reflected on the day: ‘The old trouble landlord brought about a change of field, and it was in keeping with it, too, that a seeming impossible site was converted into a splendid enclosure. A case of leaving the graveyard to enter the paradise. A happy title did that pressman strike. The lessons learnt and the experience gained on the old monument to the loyalty and fidelity of the pioneers of the club – did they not give their labour to construct it- were not lost. The splendid pedestrian and cycling tracks, which surround the playing area on which champions the world over showed their paces, added another title: ‘The home of sport.’ It was an auspicious occasion and great day when the late Fenian, Michael Davitt, laid a fresh centre sod of turf from Donegal with a handsome silver spade presented to him by the club.’

As seen in the extract from the handbook, Celtic invited Michael Davitt to perform the penultimate action of the day, when he laid the first sod of shamrock smothered turf, imported from the town of Mullaghduff in Donegal. Michael Davitt was the founder of the Irish National Land League and had served 15 years in a Dartmoor prison for ‘Fenian agitation’ and gun running. He was appointed Celtic Patron at the club’s AGM in 1889 and was a natural choice to perform such a symbolic act in terms of extenuating the Irish identity of the club.

Davitt was accompanied at the new Celtic Park by MP Timothy Daniel Sullivan, who concluded the occasion when he turned to the crowd and sang the unofficial Irish national anthem of the time: God Save Ireland. MP Sullivan had penned the song himself, in tribute to the three Manchester Martyrs, who were executed after a sham trial on 23 November 1867.

The grand opening was epitomised by a poetic east end Headmaster in the following way:

I’ll take root and flourish, of that never fear;

And though I’ll be crossed sore and oft by the foes,

You’ll find me as hardy as Thistle or Rose.

Let your play honour me and my friend Michael Davitt.

Sadly, the turf was stolen hours after it was ceremoniously laid, and the culprit was never found.