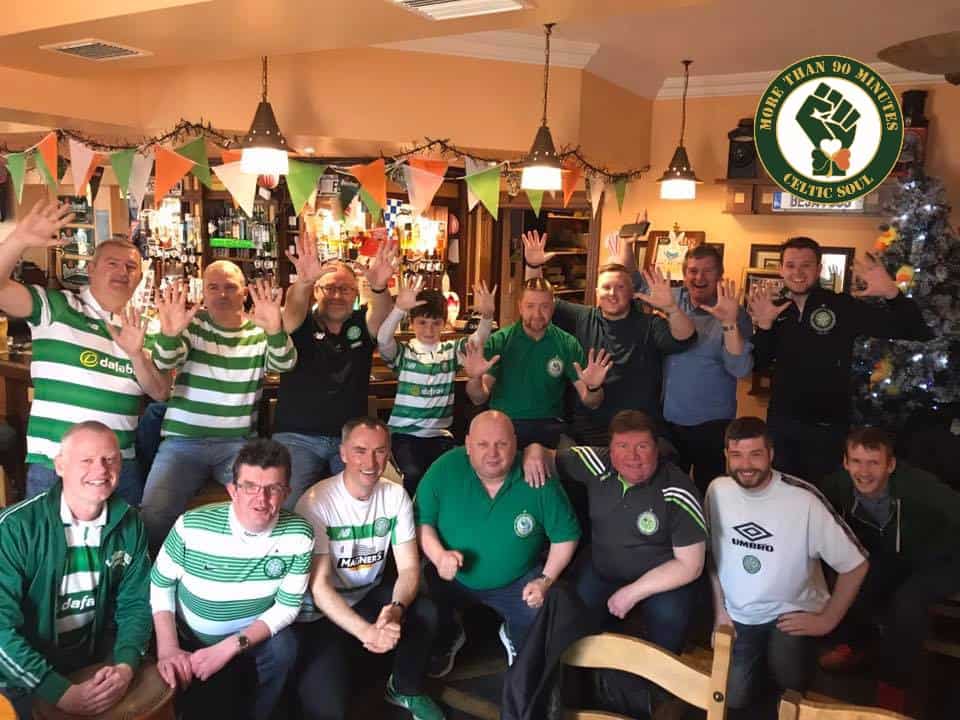 When the great Big Jock Stein rolled into Dublin on October 21st 1970 to take on Waterford in the European Cup, it was a showcase of the huge interest in the Famous Glasgow Celtic from the Waterford City area. Trains and buses were wedged with supporters taking the opportunity to see a mixture of the Lisbon Lions and the Quality Street Gang take on a Waterford team with household names like Brennan, Hale and Mathews. 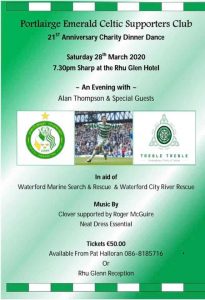 Some of the older club members talk about this day as the day that injected Green and White into their veins.

It wasn’t until the legitimate operation stop the 10 in 1997/98 was underway that the club was born. A group of like minded supporters, who regularly met for games in The Olde Stand Bar on Michael Street, decided that forming an Official CSC was the way forward. Founding committee members included Ken Slattery, Paddy Cooke, John Gaule, and Paul McSherry ran the club with approx. 40 members.

Brief spells in De La Salle Centre on Stephens St, and Rice House Bar on Barracks st, saw the clubs numbers soar to over 100. Around the turn of the Century, they found a new home in The Showboat Bar in The Glen. They were based there for 14 Years until its closure. The Showboat will fondly be remembered for where most experienced the highs and lows of being a Celtic Supporter. Martin O Neill`s Treble Season, the Road to Seville, Strachan`s Last 16 campaign and of course the death of our rivals were all highlights during their time there.

A new Chapter for the club was a move to the Grattan Bar on the Quay is fondly known as HQ.

Like other supporters clubs, their club was hit hard during the recession with numbers dropping dramatically but thankfully the efforts of some diehards kept the club on track. They now boast a very healthy 45 genuinely passionate Tims as members, with a second generation of fans starting to join our ranks.

They invite all Celtic Supporters from near and far to join them for games in the Grattan Bar where they meet for all Live games.

The CSC are celebrating their 21st Anniversary by hosting a charity dinner dance in aid of two local charities on Saturday 28th March. Special guests on the evening are the original holy goalie, John Fallon and Alan Thompson at the RhuGlen Hotel.

The W.M.S.A.R. service was set up in January 2010 by Declan and Darryl Barry to provide Waterford city and county with a 24 hour; 365 days-a-year search, rescue and recovery service. Since January 2010 the service has grown to 50 volunteers. They are also part of the Community Rescue Boats of Ireland (CRBI ). The WMSAR is a ISA – Irish Sailing Association Power Boat Training Centre.

They have 3 Boats ready to be launched. This includes a 6.3 Meter RIB as our primary rescue boat, two 4 meter Steady 400’s for search and recovery. They  also have a flood rescue boat and a 3 meter inflatable for small lakes and rivers.

Their Volunteers have rescued 28 people alive from the waters of the River Suir. Prevented 119 people from entering the river with the intention of taking their life. Clocked up over 1400 hours annually on suicide prevention patrols. Saving 147 lives since 2010.

WCRR is a non-profit organisation which operates a voluntary Search and Rescue Service on the River Suir from Mount Congrieve to Checkpoint. Their volunteers provide this essential service on a 24 hour basis, 365 days a year. They are a member of the Community Rescue Boats of Ireland (CRBI) and affiliated to the Irish Coast Guard, having successfully completed their stringent assessments and examinations of crew and equipment