Home / Celtic AM / Celtic Soul – The Power of PODcast

Celtic Soul – The Power of PODcast 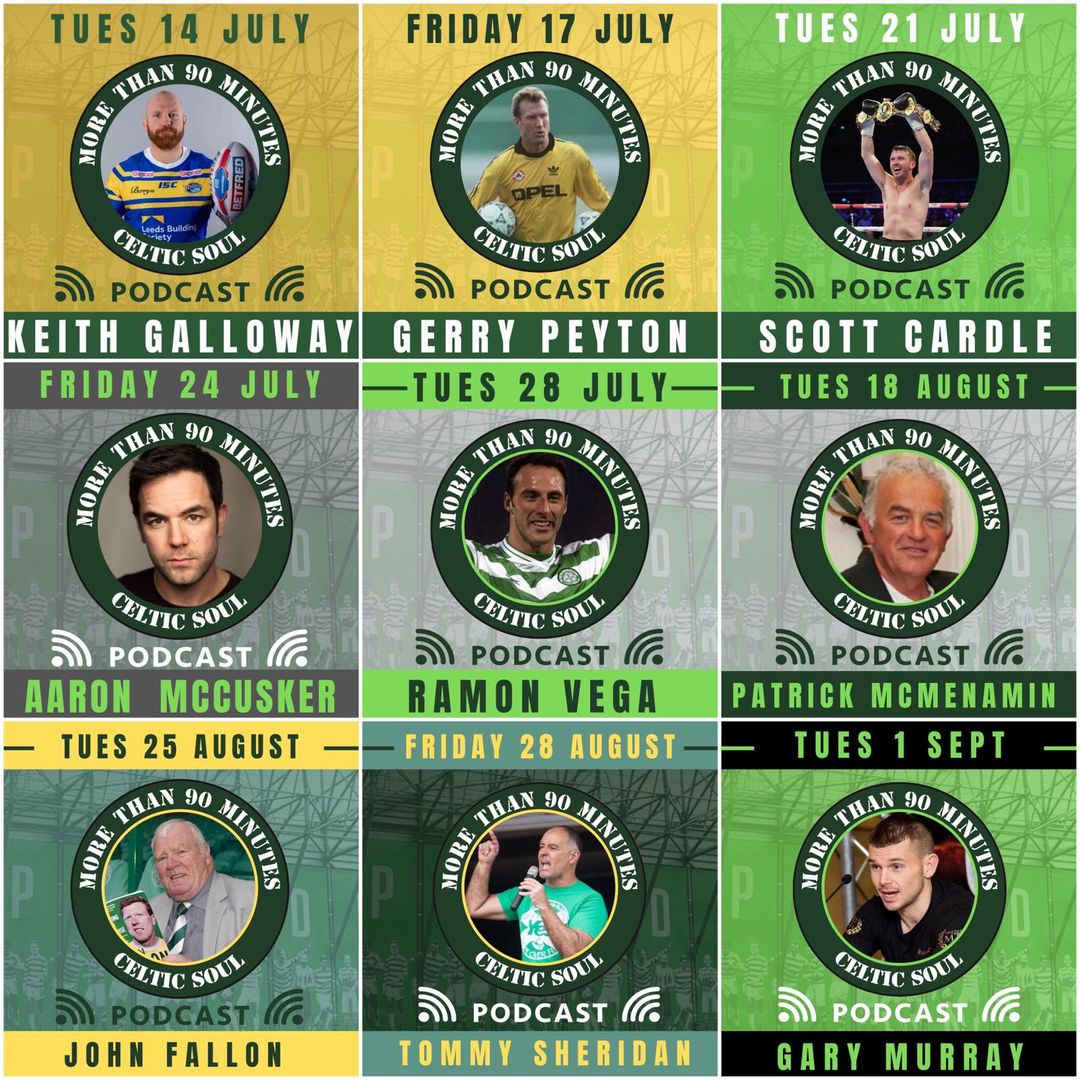 The Celtic Soul Podcast kicked off at the end of May as a lockdown project and since then we have had the pleasure of interviewing a wide variety of guests who have all agreed to let us into their Celtic Soul. We have chatted to Celtic players who have graced the hollowed turf, Celtic fans have joined us to tell their story, Sports personalities, Political activists, Actors, Journalists all spoke openly and honestly to us and a young poet Erin Boyle treated us to her words of life and Celtic in verse.

Alan Thompson has spoke about his part in this 9IAR, We celebrated John Fallon’s 80th birthday, Barry Smith gave us an insight into having to leave Celtic to progress, Ramon Vega surprised us when he told us how his parents fled Franco’s Spain to Switzerland and set up home without being able to speak the language.

Frank McAvennie relived the Centenary season, Scott McDonald shared his football journey with us, Paul Byrne opened up on coming home to Dublin after not making it at Oxford only to get a second chance with Celtic after playing in the Irish League. John Hartson told us about reaching out to Peter Lawell to mentor Leigh Griffiths.

Bobby Petta spoke about the racism he suffered in Holland as a schoolboy footballer and Tommy Johnson had little to say about John Barnes but told us about why he turned down the chance to work with Henrik Larsson. Boxer Gary Murray opened up on his recovery from his brain injuries after suffering a KO in the ring.

British Boxing Champ Scotty Cardle spoke about his battle with depression after he lost to Ricky Burns and his shattered dreams. Irish goalkeeper, Gerry Peyton joined us to pay tribute to Jack Charlton and tell us about growing up in the Irish community in Birmingham. Australian Rugby League star, Keith Galloway chatted about his Celtic connections and Jim McCalliog told us about his amazing football career from Wembley to Old Trafford and European finals.

Former SMP, Tommy Sheridan was on hand to defend Neil Lennon while Actors Arran McCusker and Johnny Ward spoke about their love of the hoops and life in the movie business and hit TV shows Shameless and Love/Hate. Anthony Joseph of Sky Sports News spoke about his experiences of racism following Celtic and Scotland.

Joe Miller from Not the View was our first guest and we also had Alternative View Editor, Matt McGlone chat to us about Celts for Change and how the Rebels won. Frank Noelkenbockoff told us about how a Dortmund fan fell in love with Glasgow and Celtic. Paddy McMenamin story from Armed Struggle to Academic while following Celtic is an amazing story and Charlie Lord an Irish man in America gave us his opinion on Trump and life as an exile Stateside.

In our latest Episode 26, we welcome Shane Duffy and we rewind to our conversations with three quality strikers Tommy Johnson, Scott McDonald and John Hartson and over the next number of weeks we have lined up more guests including fans, former players, famous actors, football scouts, an author and the man responsible for bringing the Pogues to Glasgow to play in his pub.

Thanks for listening and don’t forget to hit the subscribe or follow button so you never miss and episode.