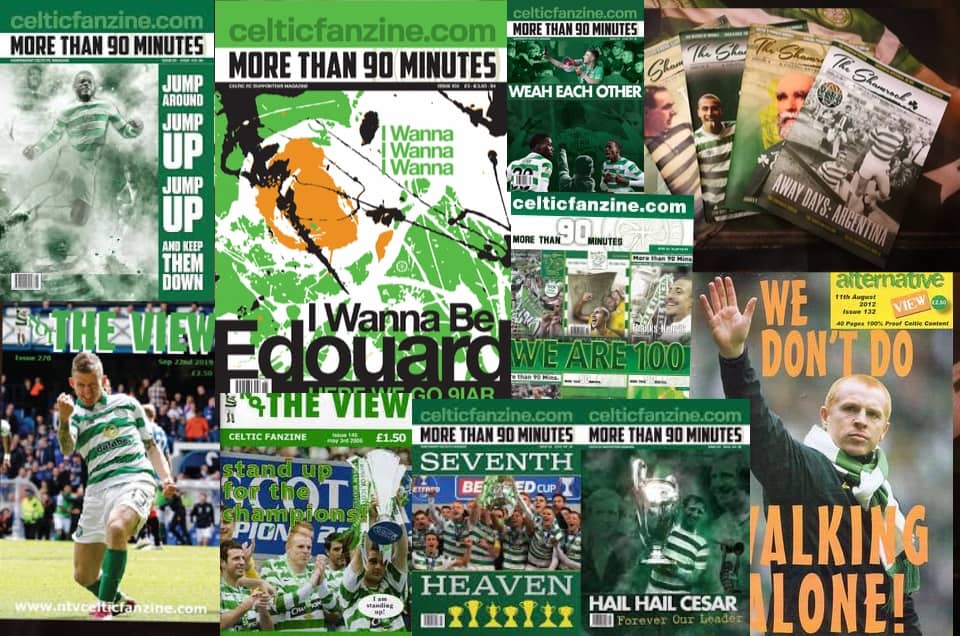 With so many forms of media available to consume these days at the touch of a button its refreshing that ordinary Celtic fans are still keeping Celtic fanzines alive and kicking after many had written them off years ago.

We at Mt90M HQ are delighted to play an active part as we released issue 105 earlier this month and celebrated 18 years of producing the fanzine in style in City North by hosting a charity dinner in keeping with the traditions of Celtic FC and our founder Brother Walfrid.

Celtic supporters can boast 4 fanzines still in print and on sale at Celtic Park on match days, More than 90 Minutes, Not the View, Alternative View and the Shamrock. Not bad when you consider we were told that print was dead but we are still here.

You can pick up issue 105 outside Celtic Park on match days, outside away stadiums, in shops and selected outlets or by visiting our online store where you can also download the digital edition, buy merchandise and tickets for our events.

Issue 105 delivers again with 48 pages packed with Celtic FC and Celtic Fan related articles and interviews. Inside you can read the Editors thoughts on all things Celtic, I wanna be Edouard, the story behind our latest cover, the player, the song the band. Colm Kennedy from St. Margaret’s CSC appears in our Fan Focus

Lisbon Lion, John Fallon is back once again to give us his take on all things Celtic. Boxer Jordy McCorry and MMA fighter Chris Bungard are in Conversation with Glasgow journalist Mick Kane. Lee Casciaro who scored against us for Red Imps talks Celtic with author Scott Alcroft about that infamous night when I witnessed the backlash from some fans as Brendan Rodgers lost his first competitive game in charge from inside a shocked stadium.

Dubliner Ciaran Kenny looks back at Brendan Rodgers and his Paradise Lost on a Grand Scale. Mick Kane looks back at the summers transfer window along with Dubliner Eoin Coyne. Derry’s Vincent Doherty is critical of Kieran Tierney as he says Goodbye to All that.

London based but Glasgow born, Scott Crystal Away Days looks back at Celtic in Sarajevo and Estonia. Glasgow’s Martin Donaldson looks back at his first visit to Paradise in 1983 and Paddy McMenamin looks back to the summer of 69 following Celtic from the mayhem of the North of Ireland.

Celtic Historian David Potter looks back at some disastrous transfers of players who departed Celtic much to the disappointment of the Celtic fans. He also reviews Tangled in Blue the latest book from Stephen O’Donnell.

18 years on still going strong thanks to the support of our fellow Celtic fans. Subscribe today and never miss a copy.