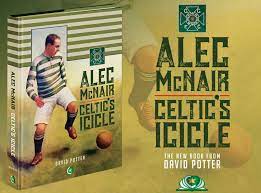 McNair made over 700 appearances for the Hoops, captaining the club for a spell and winning a total of 34 major honours. In that sense he is a bonafide legend, but his role as part of the record breaking “Holy Trinity” (Shaw, McNair, Dodds) and famous “Icicle” nickname cement his position in Celtic folklore.

It goes without saying that the Holy Trinity are well detailed in the publication, with special attention being paid to crucial matches and McNair’s towering influence in ensuring the Hoops did not concede a single goal for almost 1,300 minutes!

A man who endured much trauma in his personal life, McNair was initially rejected by Willie Maley and worked in an important role during the First World War. His tale transcends football and David Potter, writing in his own unique way, gets that fact across magnifi- cently. Indeed, great detail is afforded to the social climate of WWI Scotland, putting McNair’s struggles and the contemporary world of football into context.

Few can imagine what it must have been like for a widowed man to juggle bringing up five children with working lengthy wartime shifts and playing for the country’s most successful football team – all the while living over 30 miles from Celtic Park and travelling to matches by train. Fortunately, readers don’t have to imagine as David’s well researched book provides everyounceofinformationonthelifeandtimesofthis heroic Celt.

Stand out games, special moments and intriguing tales from McNair’s glittering Celtic career captivate the readership and enthral with the turn of each page.

The fact that the great man went on to manage Dundee, immediately after Patsy Gallacher’s iconic somersault goal (1925 Scottish Cup Final) against The Dark Blues, merely adds to the mystique of the story.

A wonderful addition to the Celtic library, with the added bonus of a warm- ing tribute from Lisbon Lion John Fallon included in the foreword, Alec McNair – Celtic’s Icicle makes for excellent summer reading.

Available in beautiful hardback, you can purchase a copy from celticstar- books.com or from official Celtic Football Club stores.

If you would like to hear more about the book, David Potter appeared as a guest on The Celtic History Podcast (available on Spotify, Anchor FM and Apple Podcasts) a few weeks ago. Throughout the episode, he discussed this latest publication and bequeathed listeners with some sensational stories about a man who ranks among the finest to ever pass through Parkhead’s gates.

Hailing from an Irish background,Liam Kelly was born in Bournemouth in 1996, with the good fortune of watching Celtic during the Martin O’Neill era. Still living on the south coast,He has a season ticket in the Lisbon Lions Stand and travels to European away matches when possible.
At the age of 19, he published his first Celtic book (Our Stories & Our Songs: The Celtic Support), which focuses exclusively on the Celtic faithful throughout the club’s history. Last year he published his second book (Take Me To Your Paradise: A History Of Celtic-Related Incidents & Events), which has now sold out in Waterstones and Official Celtic stores. His third book (Walfrid & Bould Bhoys), which he co-authored with Matt Corr and David Potter, was published in September 2020 and is stocked in all official Celtic stores.
More News
News Archive