Celtic Away Days – Cluj at Christmas 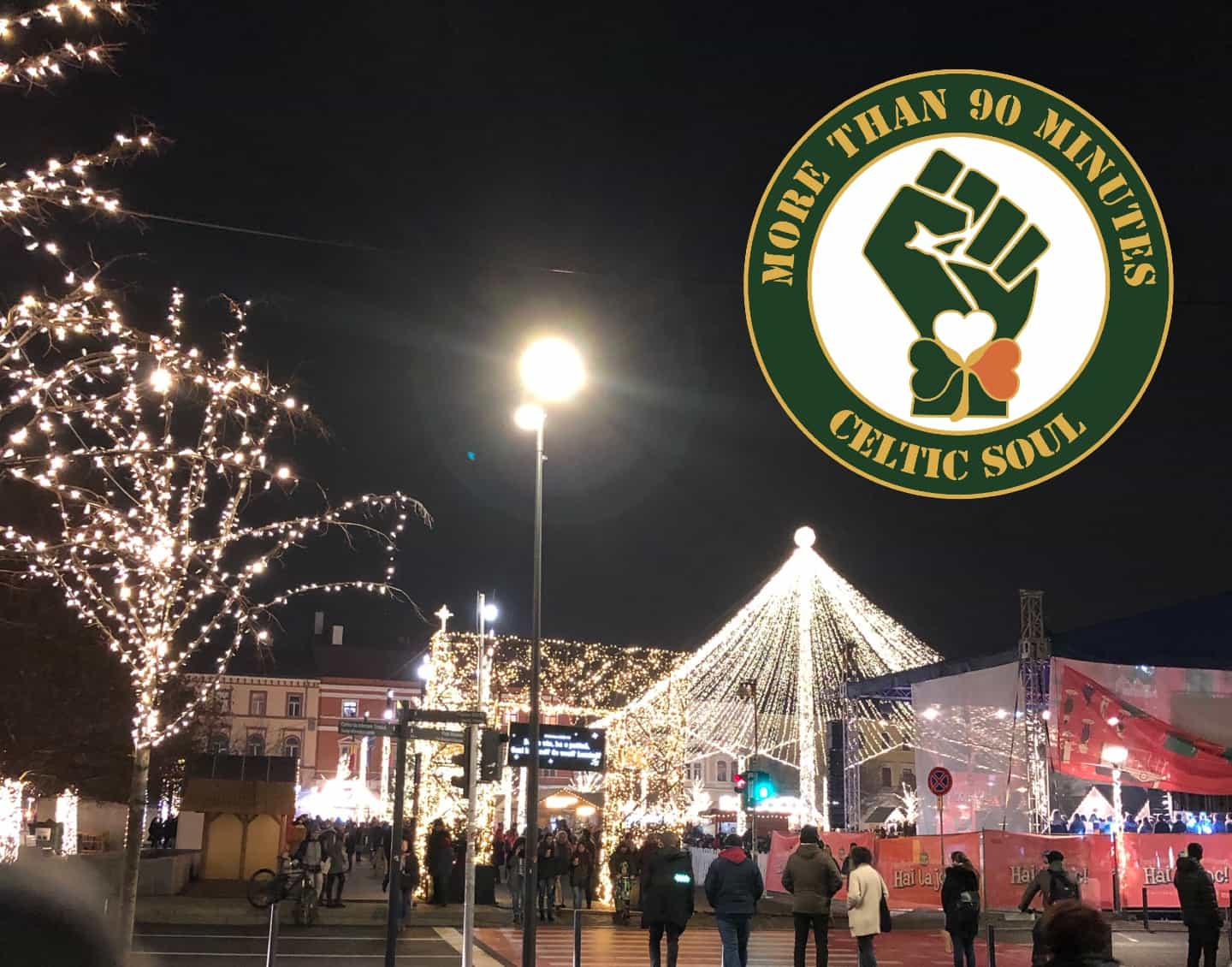 There was lovely buzz around Cluj last night in the bars and restaurants around the square which is hosting the annual Christmas market. White lights a line the streets up to the square and the whole area is lit up only by bright white lights with historical buildings as the backdrop.

The Choir were in full flow when I arrived on the stage, the smell of smoking chestnuts filled the air, the locals were out doing their Christmas shopping mingling together drinking mulled wine.

As I continued out of the market I met many more Celtic fans bringing festive cheer to the local economy and I even saw one hardy soul in shorts. He certainly didn’t read the script or look at the weather forecast. Its more hat and scarf weather than shorts and shades over here this time of the year.

The bars were packed out as everybody looked forward to tonight’s game knowing that we have won the group. The atmosphere was brilliant with everybody buzzing after Sunday’s victory.

I couldn’t celebrate on Sunday night, once I got back to the hotel after Hampden I had to go to bed with the Man Flu, I felt that bad I could have been mistaken for a Sevco fan and their was plenty of them sick on Sunday evening hopefully they will be beaten tonight to make it a really Merry Christmas for all mankind.

Thankfully I made a full recovery just in time to catch my flight to Frankfurt and then onto Cluj yesterday and was able to kick off my belated cup celebrations last night with so many like minded Celtic fans.

The place is cheap as chips, No rip off taxis here, its all on the meter and a run from the airport costs about €8 and a pint is €2 so it’s happy days. We have been so lucky with the cities we have got to visit in this Europa Group.

Rennes was welcoming as we drew 1-1 and enjoyed the last of the Summer sunshine, the fans walk to the stadium will be remembered by the locals who seemed to enjoy the noise and the colour.

Rome was special to different people for different reasons, the historical city didn’t disappoint and neither did Celtic 1-2 the score against Lazio a horrible bunch who used knives to inflict wounds on 3 fans the only dampener on an amazing trip for the 10,000 fans who made Rome home for a couple of days.

And now Celtic in Cluj at Christmas, poetic and with no pressure another away trip to enjoy.

I met up with so many familiar faces all regulars on our European away days last night. Stories were exchanged along with handshakes and hugs we really are the Celtic family.

Today I expect much of the same as we gather for more festive pints and Celtic chat before making our way to the stadium to enjoy the atmosphere and hopefully what ever team Neil Lennon selects can put in a good performance and keep the Celtic run going in Europe before we look forward to the draw while travelling home in the morning.

I’m off now for some Chestnuts, Mulled Wine and Cheap Pints. Enjoy the game where ever you are watching around the globe.

Andrew started More than 90 Minutes in 2001. He has written for numerous publications and online about Celtic. One of his essays featured in Celtic Minded 2 and he is a former newspaper columnist with the Daily Ireland and the man behind celticfanzine.com. He is host of Celtic AM pre-match events at Malone’s in Glasgow on match days and follows Celtic Home & Away. He is a season ticket holder for Celtic FC and the Republic of Ireland.