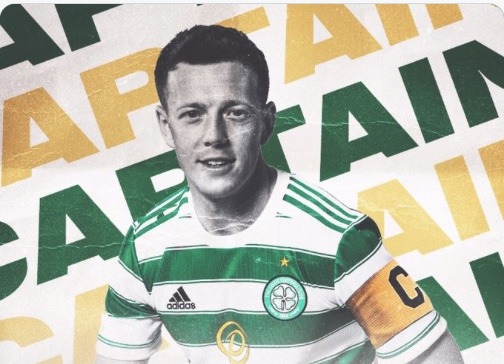 As expected Callum McGregor is the new Celtic captain, and will be Ange Postecoglou’s leader on the park as a new era kicks off for the club.

The 28-year-old midfielder has come through the Celtic Youth Academy system, and after a season on loan with Notts County, made his first-team debut for the Hoops on July 15, 2014 in a UEFA Champions League qualifier against KR Reykjavik in Iceland, when he scored the only goal of the game.

He has also been capped 34 times by Scotland, scoring one goal – in the recent European Championship against Croatia when he was one of Scotland’s most impressive performers.

Andrew Milne is Edittor of More than 90 Minutes Celtic Fanzine which he started in 2001. He has been involved with fanzines since 1989 and has written for numerous publications and online about Celtic.  He is a former newspaper columnist with the Daily Ireland and the man behind celticfanzine.com. He is host of the Celtic Soul Podcast, Talk form the Terrace Podcast, Grand Auld History Podcast & Celtic AM pre-match events in Glasgow on match days and follows Celtic Home & Away. He is a season ticket holder for Celtic FC and the Republic of Ireland. He is also P.R.O. of St. Margaret’s CSC, a member of the Celtic Trust and the Celtic Graves Association.