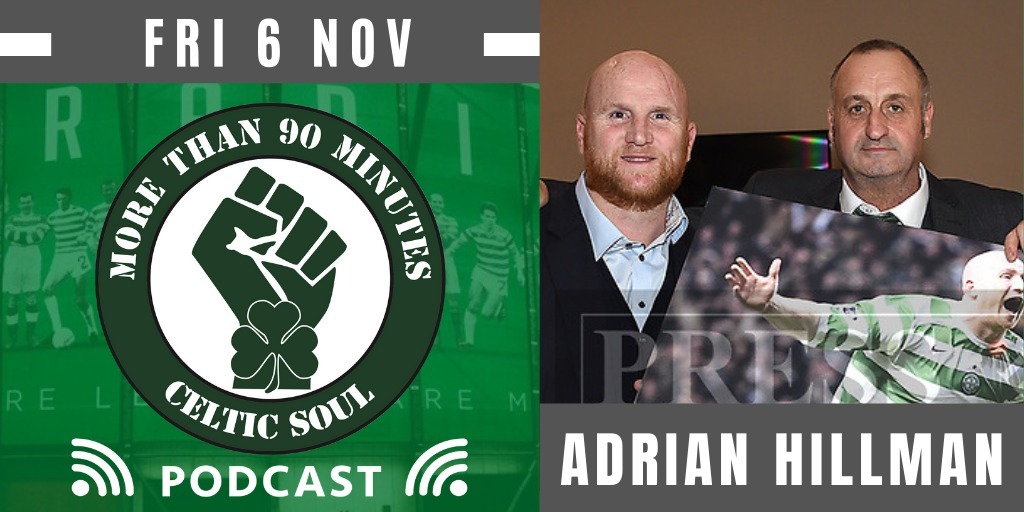 Adrian “Hilly” Hillman was born in Belfast but moved down south as a child. His Dad Tommy took him to his first Celtic game and since then he has followed Celtic home and away and was a regular at Ireland games when Celtic had Mick McCarty, Packie Bonner and Chris Morris in Jack Charlton’s army,  he formed the St. Margarets Celtic Supporters Club in 1998, the club is called after his sister Margaret who was taken far too young by cancer.

It was great to chat today to Hilly for the Celtic Soul Podcast, an old friend who I travelled throughout Europe with following Celtic and have spent endless hours on buses, boats, trains, planes and automobiles.

This year has been challenging for the Celtic supporter’s club and fair play to all 120 St. Margaret’s season ticket holders who renewed their books and may not get to enjoy a game in the flesh this season like so many other fans from Glasgow and beyond.

We looked back at last night’s disaster at Paradise and Hilly gave his thoughts on the ongoing Neil Lennon debate before he told me about leaving Belfast for Longford as a child before settling in Duleek Village in Co. Meath where he now calls home.

He moved to Birmingham for work in the late 80’s where he teamed up with the local Celtic supporters and joined them on many trips to Glasgow to cheer on the bhoys. He has also followed Ireland around the World including attending 2 World Cups and 3 Euros.

St. Margaret’s CSC has grown from a local based club in the small village of Duleek. The club started with 4 season books and 200 quid in the bank and in the past 20 years it has grown to a club that boasts over 120 members and season tickets with members based all over Ireland and Glasgow and is now a registered charity.

It was great to relive so many memories we shared over the years on the party bus and also emotional to hear about his sister Margaret who lost her battle with cancer in her late 20’s and their last phone call.

A larger than life character, Hilly is also a great supporter of many local charities and is always doing some kind of fundraising from cake sales to cycling around Ireland. On the day we celebrate Brother Walfrid founding Celtic it was a pleasure to chat to someone who continues to carry on the spirit of Walfrid.