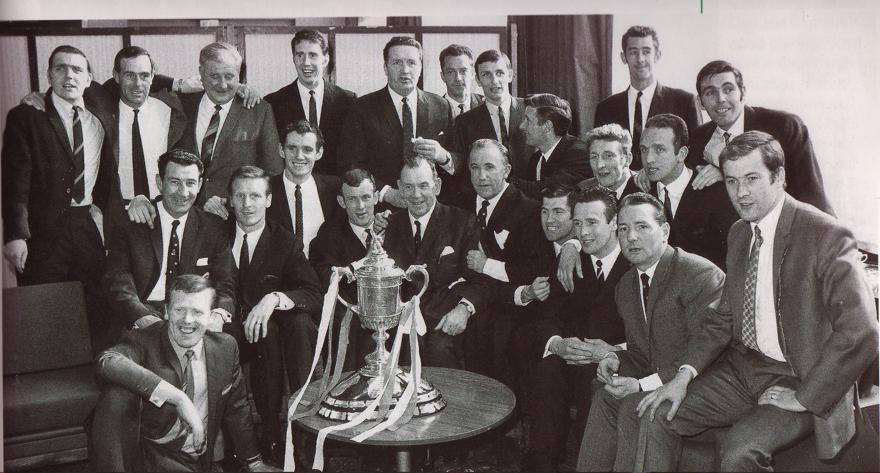 Bertie Auld might not have played in the Scottish Cup final of 1969. That he did play was due to the unavailability of Jimmy Johnstone and John Hughes. Jimmy was suspended and Yogi was injured, and this meant that George Connelly and Bertie Auld were on the wings. Bertie in fact might have played anyway even if Yogi had been available, but Yogi’s injury at St Johnstone a few weeks previously meant that Stein had no choice.

Two funny things came out of Ibrox in the build-up. Their centre forward Colin Stein (no relation to big Jock) was like Jimmy Johnstone, suspended. The Scottish Daily Express, a very pro-Rangers newspaper launched a campaign to have Stein’s suspension suspended, as it were, to allow Colin to play in the “showpiece” final. This campaign was backed by a Director of Morton FC (for obscure reasons) and Rangers themselves for a spell before they realised that this could not possibly be allowed and eventually The Scottish Daily Express realised this as well and quietly dropped the impossible idea. Meanwhile at Celtic Park, Jock Stein said nothing, allowing those who wished to do so, to make a fool of themselves.

The other funny thing was the Ibrox Victory Parade. The Stadium would be opened on the Saturday night, musical bands had been engaged (flute bands, one imagines) and the Scottish Cup would be paraded to the adoring masses, and it would be a glorious occasion. Once again, Jock Stein maintained an eloquent and dignified silence.

Stein’s master plan involved Auld and Connelly. They were given strict instructions never to move further infield than ten yards from the touchline. He did this knowing that Rangers had a strict man for man marking policy and thus Willie Mathieson and Kaj Johansen would also stay near the touchline, and leave loads of room for the speedy Lennox and Chalmers to get the better of the more ponderous Greig and McKinnon.

The plan could hardly have worked better – to the extent that Johansen wasn’t even on his goalpost as Billy McNeill scored the first, while Alex Ferguson who had been told to go up with Billy (using the elbow if necessary, presumably) failed to do so. Before half time another two goals were presented by the disorientated Rangers defence, and the Cup was as good as won.

So Bertie Auld actually had a fairly quiet game. Maybe just as well, for things were none too gentle in the middle of the park, and had HM The Queen seen the incident between a Rangers player (no name to be mentioned!) and Bobby Murdoch when “the Glasgow kiss” (commonly known as a head butt) seemed to be offered,(but maybe my eyes deceived me and the journalists all got it wrong)  there might have been no knighthood in years to come. Bertie did well to stay out of that – well, almost, more or less entirely – but he played his part on the left wing, staying where he was told except when Rangers in desperation convinced themselves that Kaj Johansen was bound to score another goal like he had done in 1966. But Celtic held on, and won 4-0.

Ibrox remained closed that night and the flutes and drummers were not deployed. But if only Colin Stein had been allowed to play by that Jesuit, priest-ridden, Vatican sympathising mob of the SFA….

As for Bertie it was his third and last Scottish Cup medal. He had more or less won the Cup on his own in 1965 (well, there was Billy McNeill’s header as well!), had been a significant player in 1967, but in 1969 his part, although important, was no more so than anyone else’s.