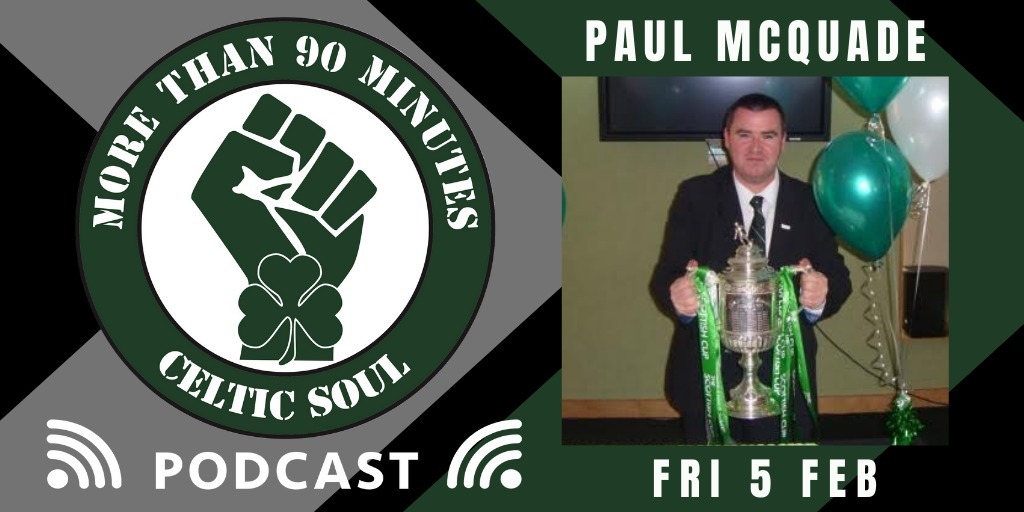 Paul McQuade is the Editor of the Shamrock Fanzine. He is also the man behind the Walfrid Walking Tours and is one of the founding members of the Celtic Graves Association. He has written three books on Celtic, Said Lizzy To Philip How Celtic Gate Crashed the Coronation, This Is How it Feels to be Celtic an account of the Invincible Season and a book of Celtic Quotes. He is currently writing a biography of Johnny Doyle.

Paul and Andrew chat about the current situation at Celtic while Paul reflects back on his formative years growing up and starting on his Celtic supporting journey. Johnny Doyle died on his 11th birthday and he now finds himself writing a biography of the player. As a youngster he waited outside the stadium to get Mo Johnston’s autograph, he has no plans to write a book on him.

His love of Celtic and Celtic’s history started at a young age when he was gifted a collection of books on Celtic and started to travel on supporters buses. He chats about selling Not the View during his University years in Edinburgh and the story telling that he has enjoyed from fellow Celtic supporters over the years. The 90’s may have been bad but you have to chuckle when he mentions Tony Mowbray’s testimonial when we were singing “Always look on the bright side of life”. A Monty Python moment!

Player recruitment and the policy of interference going back to Gordon Strachan’s time as manager get questioned and the fans stories of buses and away trips to Europe which may well lead to a book, Paul recounts stories like the bus that crossed the Alps from Turin after the windows were put in and takes us right back to the Celtic Brake Clubs who were the originators of Football Away Days

Like his pal, Brendan Sweeney, Paul’s research for his books is amazing and that shines through in this conversation with his knowledge and love of Celtic. Both Paul and Brendan are just two of the founding members of the Celtic Graves Association and it was great to see how it came about and the work they and the other volunteers have done since then and the famous names they have honoured and remembered.

Paul also takes us on a Virtual Walfrid Walking Tour starting at Celtic Park which leads us then through the streets of the East End of Glasgow from the 1870’s onwards which is a fascinating listen.