Home / Celtic AM / All Together Now 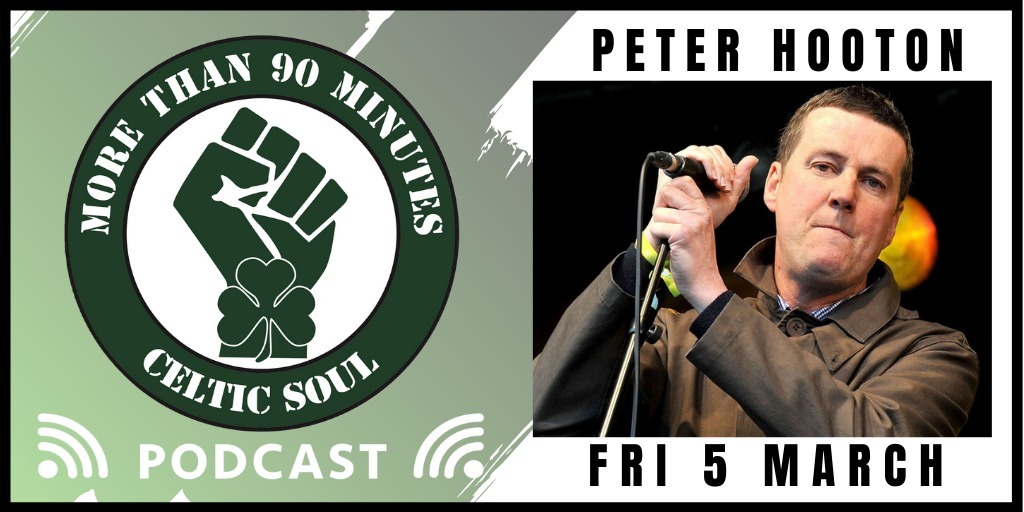 Peter Hooton, is a singer, songwriter and the front man of Liverpool band The Farm, he was a pioneer in what would become football fanzines when he started The End Fanzine back in early eighties. He is a committee member of the Liverpool fans pressure group Spirit of Shankly and just to keep busy over the years he has written a couple of books and put out a documentary on the Casuals.

The conversation kicks off with Andrew and Peter chatting about the early years of The Farm and their Irish gigs supporting The Housemartins when they hadn’t a pot to piss in and the attitude of the band inspired by the Clash, their influences and those who helped them along the way including Madness and UB40.

The Clash who Peter spent a week in the company of in Paris after blagging his way onto the guestlist after he revisited the city after a European Cup Final win for Liverpool is recalled.

Peter talks about growing up in Liverpool and his Irish connections and the traditions of the Protestant and Catholic faiths in the city. The Liverpool docks became a big employer for immigrants for the original Irish and their descendants. Peter is great story teller and paints a picture of school days and his love of football and Bill Shankly for the listeners.

His love of football and captaining his school team would see him make his first trip to Glasgow to play against local schools before going to see Celtic and a chance meeting with Jock Stein and later the Glasgow Police in a Chippy.

Both Peter and Andrew have a love of Fanzines and their DIY nature, they speak about the End and the influence it would have on the Football Fanzines that followed and the connection music has with football culture and the new forms of media with Peter describing FaceBook as the revolution that went wrong.

The conversation travels from Dublin to Liverpool to Glasgow and even to London for Soho nights with Suggs from Madness who was once the Farms manager come drinking buddy.

You’ll Never Walk Alone gets mentioned and Peter gives the story behind how Celtic fans  now sing Four Leaf Clover in Celtic Park after the Peat Diggers gig in Liverpool after Celtic UEFA cup game in the late 1990’s and he chats about the whole day in the pub listening to the band while the pub ran out of beer before emergency stocks were brought in while the fans of both teams were at Anfield.

All football fans love talking about away days and Peter tells the listeners about a trip with Liverpool up to Glasgow and sessions in the Gallowgate and the Gorbals in Bairds and the Brazenhead before the tape is paused on the first part of the interview.

In part two next Friday Peter opens up about Hillsborough, he also chats about pulling on the Celtic jersey to play alongside Jimmy Johnstone and the importance of fan pressure groups like the Spirit of Shankly and the Celtic Trust in modern football