Home / Events / Aint nothing wrong with going down, Its staying down that’s wrong

Aint nothing wrong with going down, Its staying down that’s wrong 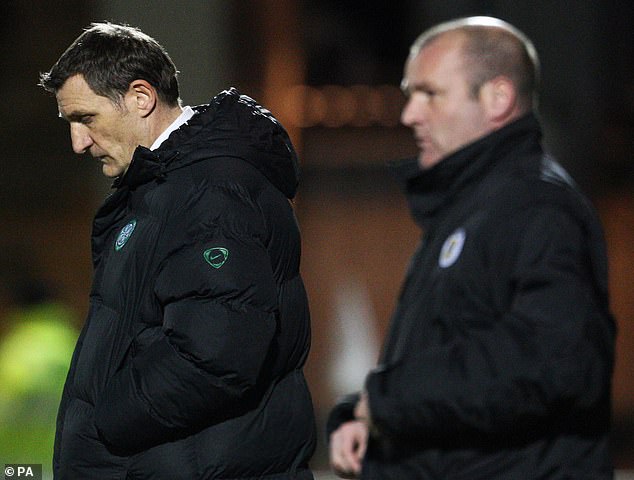 There will always be a pessimistic few that almost choke on the success of the team they follow. Their focus on the negatives always seems to be a bigger attraction to focus on. Having previously looked at the ten games of the last glorious decade in issue 107 it got me thinking about the rare disappointments we’ve had over the last ten years. What jumped out at me was that in all our disappointments over the past decade the response of the club, players and support has been immediate and we have risen from dark days very quickly. Below is a look at the ten dark days of the last decade and how we overcame them.

The Tony Mowbray era that began the decade was designed to bring an attractive style of football back to Paradise and allow the Faithful see a side playing football “The Celtic Way” again following some complaints about Strachan’s teams over the previous seasons. The reality was poor signings and too many changes saw this defeat coming. A gut wrenching last minute defeat at Ibrox a couple of weeks before killed any hope of a title challenge. Yet when this calamitous performance happened it was still shocking to see a Celtic side ripped apart by such mediocre opposition. A sickening defeat and a real sense of where do we go now as the old rangers marched on to back-to-back titles.

What happened next: Swift action by the board saw Mowbray sacked by lunchtime the day after with Neil Lennon quickly appointed. Within two years we were on the march to Ten In a row.

Season 2010/11 was in many ways unprecedented given the level of vitriol faced by Celtic manager Neil Lennon. Attempted murder by parcel bombs, physically assaulted at Tynecastle as well as abused at every ground throughout Scotland, Lennon managed to galvanise a side that were on route to what would have been a truly memorable Championship. This unexpected defeat was a sucker punch in the title race as the old Huns (1872) pipped the Bhoys due to this defeat late in the season. I remember personally watching the game and feeling numb afterwards. It was heart breaking and there was a sense that if there was any justice we would see Lennon and the Bhoys lifting that title.

What happened next: The Bhoys would lift the cup two weeks later in a memorable afternoon at a rain soaked Hampden against Motherwell. Lennon and the Bhoys would finally get their hands on the Championship the following season. As for the team that did win the league that season? They would no longer be in existence by the following summer. Karma eh, sometimes it can take longer than expected, but unlike other things it does arrive.

I can vividly remember the buzz in the Celtic end prior to this game. Four weeks previously the old Huns (1872) had gone into administration and you really got the sense this is our time. A competition that had so often haunted the Celts should have been the starting point of a great seasons celebration. Truth is the team never showed up and late Killie winner sealed the game. News filtered through after the game of the death of one of the Killie player’s father who was in the ground that day which put our disappointment into perspective. As a side note I remember a lad on our bus travelling with us for the first time who turned out to be a car crash wanting to start fires on the ferry and get naked on the way home. Trying to manage him on the journey home was a lot more memorable than the game itself.

What happened next: While the Hampden hoodoo would follow us around for another few years the title would be wrapped up four weeks later and the first of many league titles this decade would be celebrated in style. Losing at Hampden…seems a strange concept now!!

While in the large scheme of things this game technically had little to no meaning in the race for the title we had a chance to win the league at Ibrox, something that had not been done since the Lions of ’67. For whatever reason we froze on the day and having been in attendance on in the Broomloan Road stand that day I was as disappointed as I’d ever felt leaving Ibrox and trust me I’d seen some tough days there. Still we sang and danced at the impending death of our rivals but a chance for a generation to witness a bit of history was lost that day.

What happened next: We would clinch the league on April 7th away at Kilmarnock, winning the title in some style. I wasn’t at Rugby Park that day and I remember watching with a sense of envy still thinking of might have been at Ibrox. It’s fair to say nearly eight years on from that title I’ve had plenty of magical Celtic days to make up for that defeat.

In the season of our 125th anniversary qualification to the last sixteen of the Champions League brought massive excitement to Paradise. Talk of a final in London in May even entered the heads of some of the faithful. The pre match atmosphere in Paradise that night we faced the Old Lady of Italian football was as good as anything I can remember. What followed was a display by Juve whose brilliance was only matched by their cynicism. We never laid a glove on Juve that night and to end such a memorable European campaign on such a low was extremely deflating.

What happened next: The Bhoys would pick themselves up from such disappointment and the double was duly won in this special season, as the Celts disposed of Hibs in the glorious sunshine of Hampden in May of that season.

Not a game but a moment that was pivotal in the decade. There is no doubting Lennon had brought back the thunder to Paradise following his announcement as full time manager in the Summer of 2010 but by season 2013/14 a staleness had become apparent over both Lennon and his side and for reasons still not fully known Lennon walked out of the job he had loved. It was a sad ending at the time given what he had gone through as Celtic boss. I was often critical of many aspects of his management but there is no doubting he put his heart and soul into the job. You don’t often get a second chance at a club like Celtic, would Lennon be so lucky?

What happened next: Celtic appointed little known Ronnie Deila to the hot seat. An absolute Gent of a Man but you did wonder from the off if the job was too much for him.

Ronnie’s maiden season had gone quite well despite a rocky European start. We were on the march to our first treble since 2001 when another “Honest mistake” saw the Celts not given the most blatant handball you are likely to see on a football pitch while leading one nil at the time. A day where everything went wrong and we eventually crashed out after extra time to the eventual winners. Hampden by now was becoming a place of dread for the Celtic Faithful. The second half of the decade would soon change that.

What happened next: Ronnie and the Celts would lift the league trophy in May, to go alongside the League Cup trophy won in March and spirits were high heading in to the new season. European failure again in August would begin a downwards trajectory in Ronnie Deila’s Celtic managerial career.

The day that Ronnie’s Celtic dream ended. I attended the match with my old Bhoy who had seen many a defeat over the years so I was particularly gutted for him. Again it was one of those games that you got the sense from the off it may not be our day. My abiding memory of the day is actually the silence from the Celtic support leaving the ground heading on to the Aitkenhead Road back into the City. Thousands walking in unison and not a whisper in the air. My Old Bhoy took it in his stride and thankfully has been present for a number of great days over the past few season.

What happened next: Ronnie saw out the remainder of the season and graciously left the stage with the best wishes of the Celtic Faithful that May. The appointment of Brendan Rodgers in the same month was huge really. Thousands descended on Paradise for the dawn of a new era of unprecedented domestic success for the Bhoys.

While this is not a specific moment it does warrant speaking about when looking at the low moments of the decade. Regardless of what you think of Brendan the man, Brendan the manager by and large was brilliant for us winning all seven domestic trophies he entered. Yet Brendan’s European record saw us become a bit of an embarrassment in the Champions League. I’m not sure was it naivety or pure bull headedness but some of our performances and results against the likes of Barcelona (7-0) Paris St. Germain (beaten 12-1 over two games) as well as numerous home European defeats left a bad taste in the mouth given how much had been put in by previous Celtic teams to make Celtic Park a fortress.

What happened next: A more pragmatic approach to European football has seen us win our three home group stage games and top the group in the Europa League including two particularly magical nights against Italian high fliers Lazio. A few more nights like that wouldn’t go amiss over the coming season.

It was almost like a JFK moment for many within the faithful. As the rumours flew around social media personally I remember thinking if he’s to leave he won’t go to a “Nothing” club like Leicester. But he did. On the morning of February 26th Brendan, shiny teeth and tan intact walked out of Celtic Park. The board’s swift appointment of Neil Lennon on the same day has turned out to be brilliant and as they say in life as one door closes another one opens.

It was a truly shocking moment for the Celtic Faithful who had backed Brendan to the hilt but like unrequited love it’s never worth crying over.

What happened next: Neil Lennon came back to Paradise six years after leaving the stage. Neil looks more assured and confident in his role and let’s hope Neil is the Man to get us to Ten In a row. The Man that took over from the shambles that was our side at the start of the last decade is leading us into the next one in a really healthy position challenging on all fronts.

The decade just gone as I’ve previously written about was magical and as football fans disappointment is something you have to contend with. If your blessed to be a Celt we’ve been fortunate to be able to get over it very quickly. These are magical times, we will always have sporadic disappointments but as the last decade showed the club and support will always address these and move on. Here’s moving to the magical Ten In A Row.