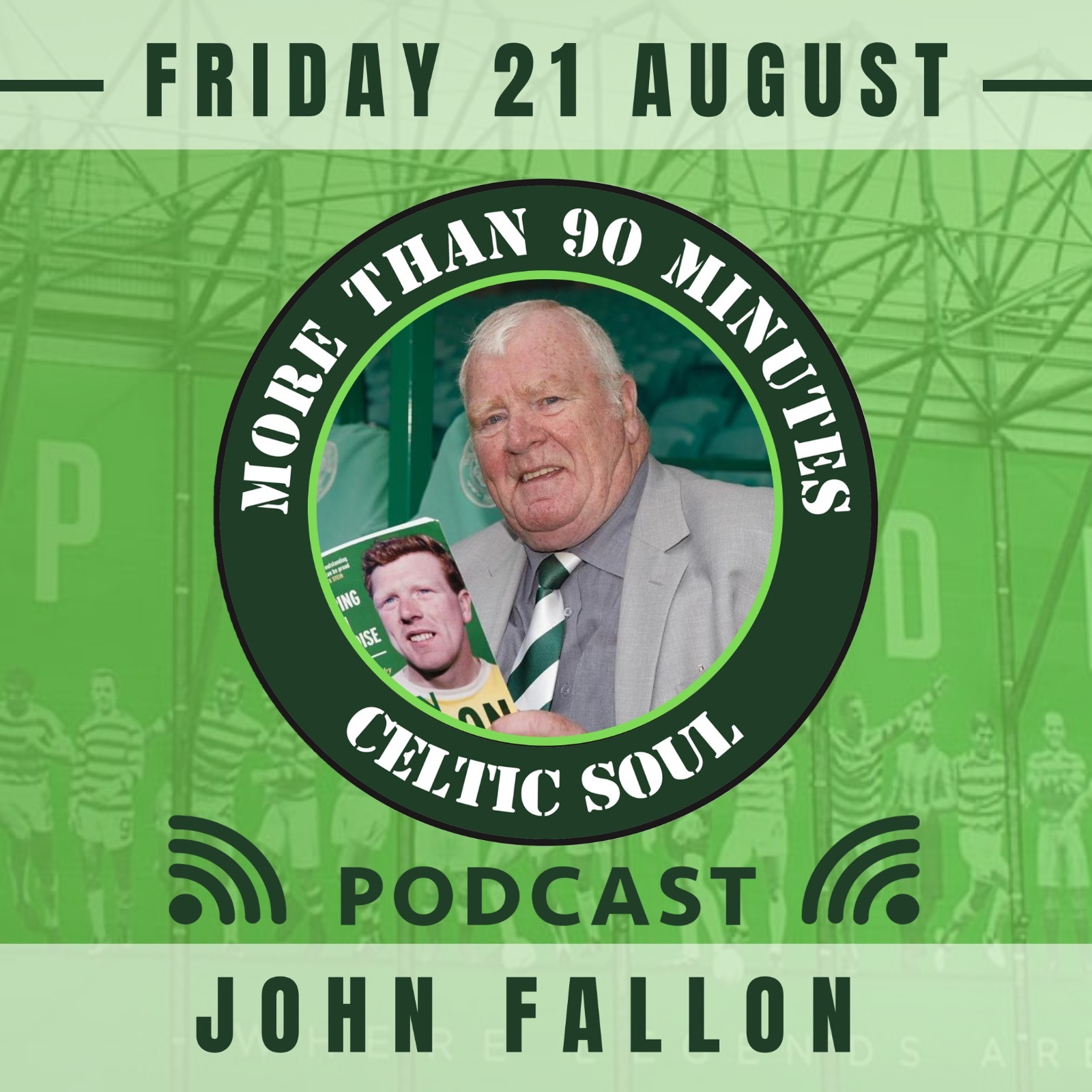 It was an absolute pleasure to interview John Fallon for the Celtic Soul Podcast episode 22. In Part 1 of a 2-part interview, John spoke about the current Celtic goalkeepers before we looked back at his life as he celebrates his 80th Birthday. John the big tough goalkeeper was emotional at times as he looked back on growing up in Glasgow when his father was running the Empire Bar in the Saltmarkets area of the East End.

John’s grandfather had come from Sligo and married John’s grandmother Murphy. He takes pride in his Irish roots; his summer holidays were spent in Sligo. John recalls many of the games and the players he watched from the terraces as a youngster and he has fond memories of 1957, Celtic 7, Rangers 1 in the Hampden Sun. John tells a great story of how his father got news of the result while opening up his Pub.

Little did John know that a year later he would be signing for Celtic and within another year he would make his debut and play alongside his heroes. Celtic through and through, that’s how I describe John and he is missing watching Celtic so much.

The great Charlie Tully wrote in his newspaper column how good a keeper the young John Fallon was after John trained with his heroes as part of the Kelly kids, the next day, John signed for Celtic without asking what his wages were. Money was not important and anyway his mother took his wages, put it in the bank and gave him pocket money.

He talks the listeners through that famous day in Lisbon in 1967 from the dugout, to his place on the bench where he recalls many moments of the game and what was said at half time in the dressing room to the final whistle madness and the evening reception where Billy McNeill would hand the players their winners medals.

John also talks about how his medal was taken off him that night and replaced with a replica medal at a later date. Thankfully after an argument on Twitter last year, John’s original medal was found and was on its way back to John thanks to Peter Lawell.

John also mentions how the Lions who played on the way to the final but not in Lisbon were maybe let down during the 25th Anniversary of Lisbon Lions.

Heartbroken that’s how John felt when he left Celtic and Part 1 finishes with glimpses of John’s strained relationship with Jock Stein who was asked to leave John’s house by John’s wife Esther. Jock had just told John he was finished at Celtic and he was on his way to Motherwell. They never spoke again after John was refused entry through the main entrance to Celtic Park a few days later for a European game. John admired Jock as a coach but questioned his man management skills.

John played against Celtic when he captained Motherwell but would not return to Celtic Park as a fan until Billy McNeill became manager.

Click the link below to listen to the first part of the interview. Part 2 will feature on Tuesday’s show.