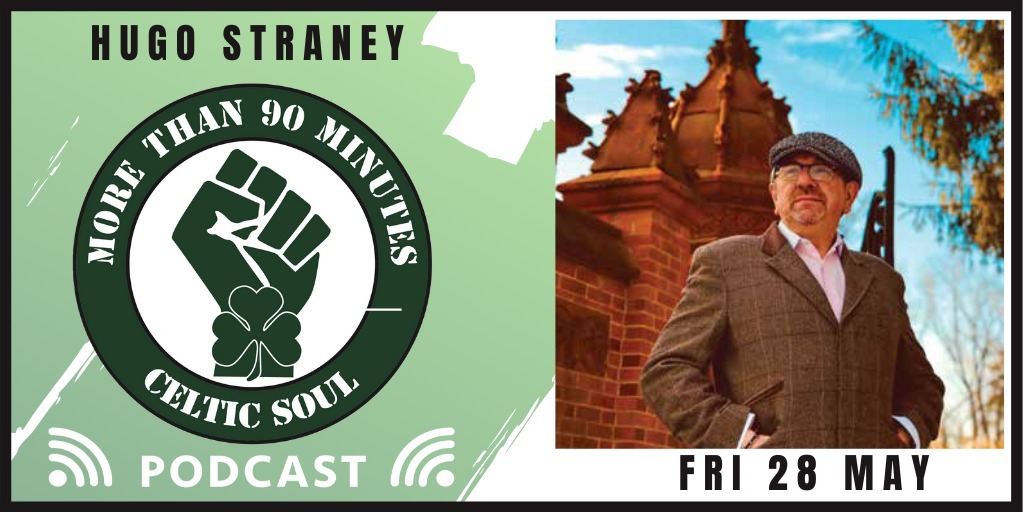 Hugo Straney will is well known to many Celtic Fans as the host of the NAFCSC Las Vegas Convention born in Belfast, Hugo grew up in the Divis Flats before emigrating as16 year old for a new life in Toronto in the 1970’s.

The conversation kicks off with Hugo and Andrew as they look back at some memorable moments from the North Amercian Convention over the years before Hugo talks about growing up in the Divis flats in Belfast including missing Dana winning the Eurovision Song Contest and a documentary that was made years later about the flats.

Celtic play a part in most of our guests lives on the show, Hugo first went to see Celtic as a 9 year old in Glasgow when they played Manchester United in a pre-season friendly and takes the listeners back to that special afternoon and a 4-1 win in the season that Celtic would become Champions of Europe and little did the wee bhoy know then that he would be on stage welcoming all those Celtic legends on to Las Vegas years later.

He also chats about going over to see Celtic play Leeds United at Hampden with his pals including Jim Mervin who I have shared many a bus with to Glasgow over the years.

After emigrating to Canada and the culture shock that awaited Hugo soon settled into life across the Atlantic. In 1981 his homecoming was a sad one, when he returned to Belfast for his cousins funeral, Joe McDonnell died on Hunger strike in the Maze Prison at a very dark period in Ireland’s history.

Hugo travelled back to Toronto and got involved in the Entertainment scene which he would continue to be involved in for almost 40 years including spinning records, singing, acting on stage and hosting his radio show and has also hosted the Celtic FC Foundaton dinner in New York and even played the late great Joe Dolan in a musical.

The Celtic Soul Time Machine gets dusted down and Hugo climbs in and goes back to Celtic Park for the 5-1 Dembele Demolition when he was sat next to Tommy Docherty.

Thousands Are Sailing Can Cooler